This post will walk you through how to troubleshoot the "Element is not clickable at point... Other element would receive the click" error when running Selenium based tests with Capybara. I encountered this recently when a feature test that had been passing for years, suddenly started breaking when running as part of the Continuous Integration checks on a project I'm working on, which is run with a Github Actions workflow.

This was the error message:

The error message was coming from this line in the test:

Which means find an html element <label>...</label> on the page that contains the text FORWARDING and click on it. The Capybara documentation has more details about the find method.

Here is the UI that is exercised for this test. This app allows users to manage email mailboxes and optionally update forward settings:

After the test clicks the forwarding toggle, the expected result is that the UI updates to allow entering an email address to forward to and saving changes:

It was very strange that this test started failing, as the mailbox management area of the code hadn't changed in years, and the test was passing when run locally on my laptop.

At this point, those in a hurry can jump straight to the solution. Otherwise, read on for step by step debugging of this issue.

Before getting further into troubleshooting, a brief description of this projects' testing stack:

This is a Rails project which uses Capybara to write the feature tests. Capybara is capable of launching a real browser (either visual or headless), navigating to pages of the application, interacting with elements just like a human user would, and executing assertions to verify that expected elements or text is displayed on the page.

Capybara requires a driver to control the browser. By default, it uses the :rack_test driver, which is fast, but only suitable for pure fullstack Rails projects (i.e. no front end JavaScript). Since this project uses React for the front end, the Selenium driver is used instead. Specifically, :selenium_chrome when running the tests against visual Chrome, and :selenium_chrome_headless for running against headless Chrome.

In order to use Selenium with Capybara, the selenium-webdriver gem, which provides Ruby bindings, is required. It also requires that the browser-specific drivers are installed on the machine where the tests are running. For example, if running tests against Chrome, then Selenium expects to find ChromeDriver installed, whose version must be compatible with the version of the Chrome browser that the tests are running against. To avoid developers having to manually install and maintain browser driver versions, this project uses the webdrivers gem, which automatically installs and updates the browser drivers.

When encountering this type of situation (test fails on CI but passes locally), the first thing to do is determine what's different between CI and laptop setup. My first thought went to browser and driver versions. The code itself hadn't changed, but browser/driver versions are updated constantly so this is a likely culprit.

Looking more closely at the error message, it indicates that Chrome 101 is being used on the Github Action runner:

The next question to ask is: What version is being used locally on my laptop? Recall this test was passing locally. The tests are run against a headless Chrome browser which requires a local installation of chromedriver. The webdrivers gem automatically downloads the latest version of the driver for the browser being used by the tests. This gem by default downloads drivers to the ~/.webdrivers directory so you can check what it installed. From my laptop:

Aha! My local had one version (100) older of chromedriver. In order for webdriver to update to the latest, I opened Chrome on my laptop and selected from the menu: Chrome -> About Google Chrome, which triggered an update to the latest 101. Yes Chrome is auto updating, but sometimes it requires a little "kick" to get going to the next version.

I then ran the test locally, and this time the webdrivers gem detected Chrome 101, and installed an updated driver for this version. This caused the test to fail, with the same error message as was displayed on CI. This was progress, at least there was consistent behaviour between my laptop and the CI system.

The next step was to dig in more into the error, I was curious about the specific point reference:

This means the test is trying to click at x position 700 and y position 225 on the page and not finding anything clickable such as an input or link. None of the tests use co-ordinates to select elements because it would be too brittle. Any design change or layout shift would break a test that expected an element to be in a specific location on the page. So why was the test reporting an error about a specific point reference?

To find where this point was on the page, I installed the coordinates Chrome extension, navigated to the Email Forwarding area of the app and enabled the extension. Here is where point (700, 225) occurs on the page:

Indeed this is a point of "white space" with nothing clickable in that area. The actual toggle that should be clicked occurs way more to the left and slightly above this point. So that explains why the test reports not clickable at point (700, 225). But why is the test trying to click at this specific point rather than the toggle that is selected by the test?

To investigate further, I needed to take a closer look at the markup for the element the test is trying to click:

This toggle control is not a native element. The implementation to achieve this effect is to use native <label>...</label> and <input type="checkbox">...</input> elements, hide the input element, and then style the label to appear like a toggle. Here's the markup for this control:

Recall that the test is trying to click on the <label> element that contains "FORWARDING" text. Let's see what this element looks like when selected in Chrome Developer Tools:

Well that's a surprise, look how wide it is! But actually, this makes sense given the markup. The label is contained in a div that's styled as a row, so it's taking up the entire width of its parent container (together with some other styles in the css that make this happen).

It was at this point that I started to wonder whether the larger than expected size of the label element might have something to do with Capybara reporting there was nothing clickable here.

Next I wanted to understand where the coordinates from the error message is not clickable at point (700, 225) fit in with respect to the label element selected by the test.

Capybara can provide more details about a selected element using the rect method. This method returns the x and y coordinates of the top left corner of the element, along with its width and height. Here's a temporary modification of the test to output the results of the rect method:

Here's the output in console from running the test:

The output is showing that the top left position of the label element occurs at x position 365 and y position 205. Further, the element is 670 wide by 40 tall.

The Capybara docs link for the rect method doesn't have any details about what this method does. It can be deduced from running it on an element as I've done above and inspecting the output. However, if you're curious as to what it actually does, see the Appendix at the end of this post.

Here's a visual putting this all together, along with the point the text is actually clicking on:

So this explains where the point co-ordinates in the error message come from. The next question is why does the test click in the center of the element? Recall the line of the test that performs the click is:

Aha! Another mystery solved, the documentation states that the element will be clicked in the middle unless offsets are specified:

Both x: and y: must be specified if an offset is wanted, if not specified the click will occur at the middle of the element.

Since the particular UI this test is driving has the actual toggle input near the top left corner, a small amount of offset from this point should resolve this:

And indeed, running the test with this updated code, both locally and the continuous integration workflow passed.

When dealing with the vertical y co-ordinate, note that it starts at 0 at the top of the page, and increases in a downwards direction. This is different from the graphs taught in elementary school math class where the 0 position starts at the bottom and increases upwards. The reason for this has to do with the history of CRTs. 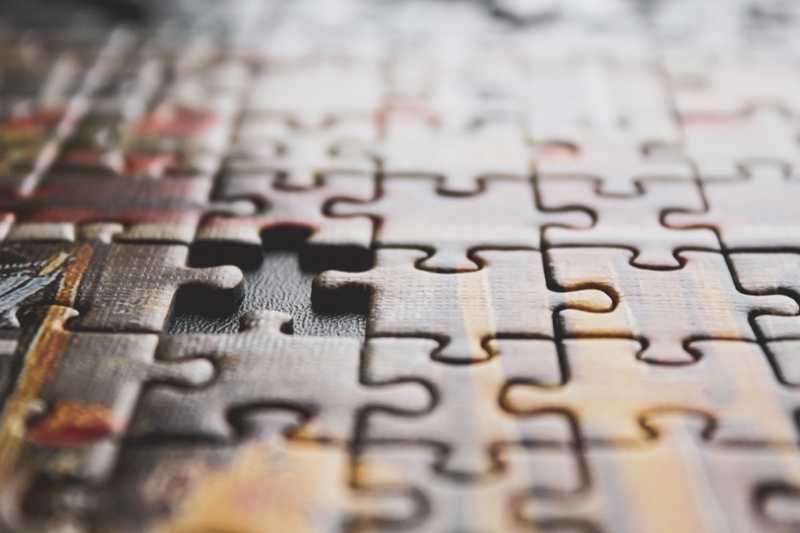 There does remain one unexplained piece of this puzzle.

Why was this test passing on all older Chrome versions up to 100, and only started failing on 101? Is it possible that older versions of ChromeDriver were actually clicking at the top left of elements, and that center clicking was only implemented in v101? It's not clear from the release notes:

If anyone has an explanation, I would be very interested to hear about it.

This post has covered how to debug and solve the "Element is not clickable at point... Other element would receive the click" error when running Selenium based tests with Capybara. The process was to compare dependency versions on CI vs local, setup the conditions to reproduce the issue locally, inspect the co-ordinates reported by the failing test, compare this to the markup and element in developer tools, and some careful review of the Capybara documentation to understand the nuances of the click method.

As part of debugging this issue, the Capybara::Node::Element#rect method was helpful in identifying details of the element selected by the test. However, the Capybara documentation for this method only contains links to the source, without any further details:

Intuitively it can be understood from calling it that it returns size and positioning details of the element, but my curiosity was piqued as to exactly what it does so I went down a little rabbit hole to trace it through. 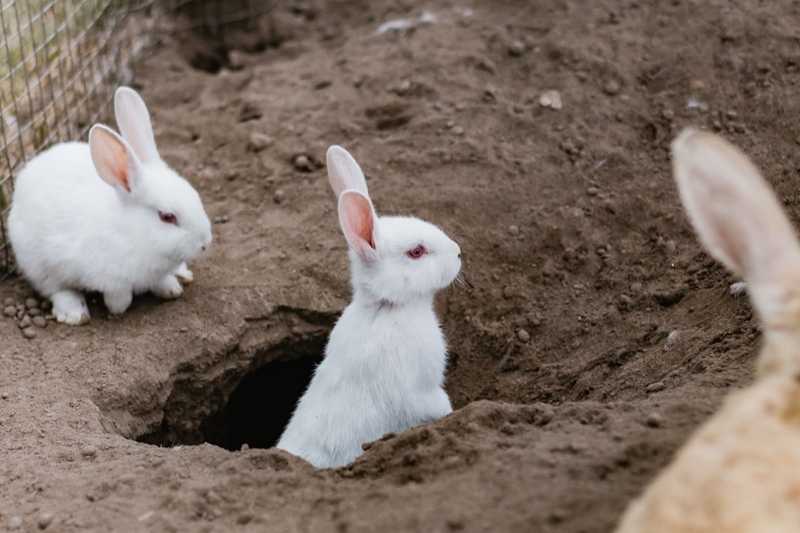 Following the View on Github link from the Capybara documentation site led to the following code:

synchronize is a method defined in the base class to resolve timing issues but will not dig into this as its not related to the rect method. I found the implementation of the rect method in Capybara::Selenium::Node:

According to this discussion, native is an instance of ::Selenium::WebDriver::Element, so to understand what the rect method does requires finding this implementation. However, this class isn't in the Capybara project, it's defined in the selenium-webdriver gem that is a required dependency when using Capybara with Selenium.

Looking in the selenium-webdriver's api documentation, there is some information about the ::Selenium::WebDriver::Element#rect method, although rather brief:

I was also able to find more detailed documentation for the Selenium Browser Automation Project. Navigating through WebDriver -> Elements -> Information -> Size and Position leads to this more detailed explanation: 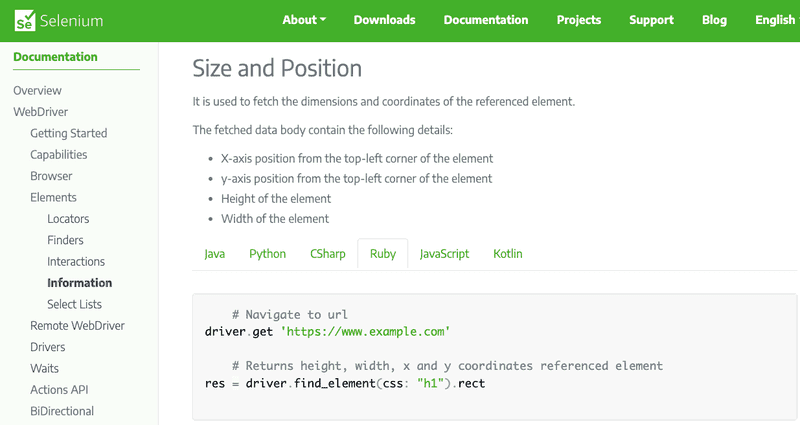 And that ultimately explains what the rect method returns. It matches my intuition about it from seeing the returned result from invoking this method in a test, but it was good to confirm this with the official documentation.

Dockerize a Rails Application for Development