Use UUID for primary key with Rails and Postgres

When working with Rails and a relational database such as Postgres, the default option for primary key is an auto-incrementing sequence. So the first record inserted would get a primary key of 1, next one 2 and so on. Depending on the system, this can be an issue if these values get exposed in urls, for example /subscription/265 would reveal that 265 subscriptions have been generated, and that the next one will be id 266.

This post shows the steps needed to configure Rails to use UUID for primary key with Postgres. This works best on a brand new application with no production data yet. Trying to convert an existing system could be risky because every single record in every table would have to get migrated and foreign key constraints temporarily dropped during migration.

The pgcrypto module provides cryptographic functions for Postgres, however, it's not enabled by default. This should be the first migration to enable it:

Verify the extension has been enabled. I'm using Datagrip but you can check with your sql client of choice. Expand the databases list, then check under extensions and you should see something like this: 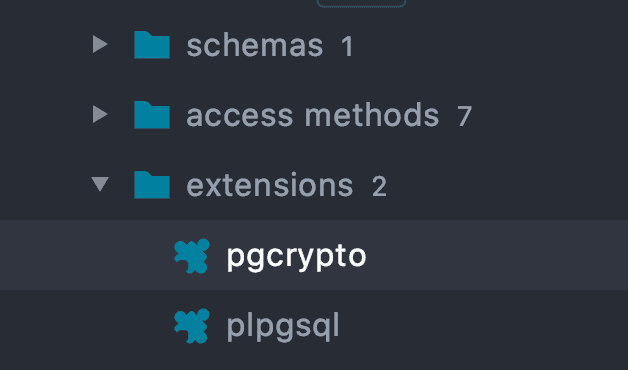 Add the following to the generators config so it knows to generate uuid primary keys:

Time to try it out. Start by generating a model:

Open the generated migration - notice the type for id is uuid:

Verify how this looks in the database - notice that the id column is using the gen_random_uuid() function:

Launch the Rails console and insert some data into the new table - you should see that the id is a UUID:

One last thing to watch out for is adding a foreign key reference to a table. For example, suppose there is a Plan table and you want to add a reference to the Tenants table. The migration for this is:

However, running this won't work because it will try to create an integer type column tenant_id on the Plans referencing the id column on Tenants table which is of type uuid which doesn't match. For these type of migrations, need to specify type: :uuid:

That's it, now you're all setup to use UUID as the primary key in all your models.

Dockerize a Rails Application for Development

Start a Rails 6 Project with RSpec